The following DSP-EI brothers have passed on to their eternal reward. They remain with us in the bond eternal:
(As of 10/18/17)

He was born April 12, 1955, in Viroqua to Herbert and Dolores (Jacobson) Quamme. Stan was baptized and confirmed at Mount Sterling Lutheran Church, was a graduate of North Crawford High School and received his B.S. degree in Business Administration from the University of Wisconsin-La Crosse. He had been employed by G. Heileman Brewing Co. for more than 20 years.

His work ethic began early in his life. Growing up on a farm he learned to raise tobacco and help with other chores, as well as working for a local orchard and the Mount Sterling Cheese Factory. Stan's entrepreneurial spirit remained a constant part of his life as he pursued new business ventures: Quamme Apartments, Quamme's Country Corner, Quality Custom Work and Quamme Ground Express.

He served as village president of Mount Sterling and enjoyed the challenge of helping establish and grow the Mount Sterling Mid-Summer Fest. Stan was proud of his Norwegian heritage and passed on the "art" of cooking lutefisk.

A kid at heart, Stan loved his toys: cycles, snowmobiles and Cushmann scooter - anything motorized. Stan's life involved action - as a boy making laps with his dirt bike and go cart and, as he grew, racing across a field or track. He was always rebuilding, repairing and restoring.

Coaching, watching and encouraging his children in their sports and other activities as they grew were some of his greatest joys. Stan loved any time spent on the river or in the woods.

He was preceded in death by his parents.

La Crosse, and again at the church on Friday from 1 p.m. until time of services.

Information and online condolences may be given to the family at www.dickinsonfuneralhomes.com. 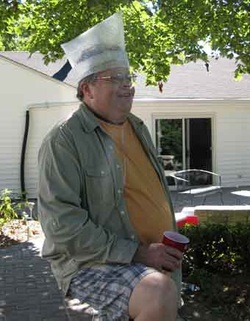 I'll never forget that, ya had to be there, he made me laugh so hard I almost pee'd my pants...you don't get the "Swanny mannerisms" from the picture. I remember I kept finding myself somehow standing on his oxygen hose that day. Swanny was truly a man among men.. He had hard knocks from the time he was a little kid and battled through so many bad breaks and pain and anguish without EVER feeling sorry for himself or complaining. He was a fighter. He never gave up. He never said a bad word about anyone... but he sure did make me laugh alot..even days after his fiancé past away...he was cheering us up


I'll never forget being at the hospital with Greg and Norm the night he got burned. When we saw him there was just no way anyone could survive the damage he had...but he did...he always amazed me. I loved this guy so much for his heart, his kindness, who he was and all the memories. He was truly one of a kind. I wish I would have been there more often for him. Truthfully, I could never have handled what life threw at Swanny. If there really is an instance of life being unfair....


When things seem terrible, or you feel stressed out or feel like complaining or criticizing just think about what our brother would have done...and you'll realize, it ain't nothin.

I believe that he was in the US Navy when he passed, serving on a Sub. A great guy, and a loyal DSP to the end, all who knew Clark, called him brother and friend.

I got this information from brothers Mike Donohoe and Andy Marks. I do not know anymore at this time. Very sad. Jeff was with us at the 40th.

Bad news, Jar--the worst kind. Jeff Wolfe died today after a very brief illness. He was 42. Left behind two very young childern and wife. Wasn't feeling well at all, his mother, a friend of my wife's, went to Denver to be with him. Don't know exactly what happened, possibly a very serious fast moving infection.